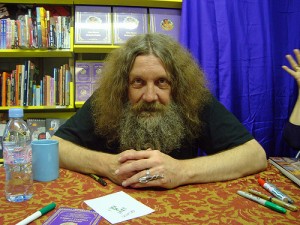 I talked to [director] Terry Gilliam in the ’80s, and he asked me how I would make Watchmen into a film. I said, ”Well actually, Terry, if anybody asked me, I would have said, ‘I wouldn’t.”’ And I think that Terry [who aborted his attempted adaptation of the book] eventually came to agree with me. There are things that we did with Watchmen that could only work in a comic, and were indeed designed to show off things that other media can’t.

My first novel [Voice of the Fire, released in the U.S. in 2004] was based upon Northamptonshire [where he grew up], over the course of some 6,000 years. I thought that with this one I would focus in upon this relatively tiny section of Northamptonshire called the Boroughs. So I started to connect different things. I remembered an incident during my childhood when my younger brother, Mike, had choked at the age of 3 or 4, on a cough sweet…and he stopped breathing. Because it was a fairly rundown neighborhood — there wasn’t a telephone anywhere and nobody owned a car — a man who lived next door to us who had a vegetable delivery service drove my brother and mother to the hospital. It would have taken about 10 minutes, even at a generous estimate; apparently after two-and-a-half minutes I think it’s brain death. However, he was back with us by the end of the week. I’ve been having some thoughts myself, about life and death, where we go when we die. 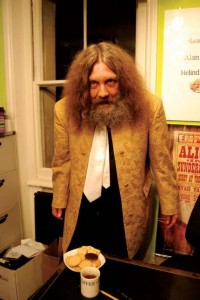 I was turning 40 and thinking, Oh dear, I’m probably going to have one of those midlife crisis things which always just bore the hell out of everybody. So it would probably be better if, rather than just having a midlife crisis, I just went completely screaming mad and declared myself to be a magician. That would, at least, be more colorful. So, I announced, on the night of my 40th birthday party — probably after more beers than I should have had — that, ”from this point on, I’m going to become a magician.” And then the next morning you have to think, Oh, what have I said now? Are we going to have to go through with this? So I had to go about finding out what a magician was and what they did.

Well at the time I think I had vain thoughts, thinking “Oh well, no-one’s going to be able to follow this, they’ll all just have to stop producing superhero comics and do something more rewarding with their lives” but no, what happened was that it just started a whole genre of pretentious comics or miserable comics – or you could even see, you look at the Image comics of the early ’90s, and you could see people who were predominantly superhero artists who hadn’t got much of a grasp of

writing, trying to sort of lift riffs from Watchmen, Dark Knight, you know, those mid-’80s books. It was like looking at your deformed bastard grandchildren or something like that. Yeah, I think that David Bowie once referred to himself as “The face that launched a thousand pretensions,” and you can somehow kind of feel the same way [as] when I saw the actual effect of Watchmen upon comics [which] was probably a kind of deleterious effect, which is not surprizing I guess. Often the better works in any medium have the most negative effect. It’s paradoxical but you get, say, something like Harvey Kurtzman’s MAD comics in the mid-’50s, which to my mind if I had to pick one single comic book that was the best comic book ever it would be Kurtzman’s MAD, that was the best comic book ever in my opinion but the thing is that, brilliant though it was, it doomed us to sixty years of humour comics named after some sort of mental aberration or illness.

I wanted it to be devastating. I wanted to do a book that was, in its way, just as devastating as the actual events that it was talking about. I wanted to try and turn the basic ideas of the Jack the Ripper story, and the way that it’s generally been presented, to turn those notions around. Because all too often, Jack the Ripper is the inspiration for a lot of the stalk-and-slash movies that make up such a large chunk of our cinema even today and I’ve never liked that kind of film. I’ve never liked the treatment of Jack the Ripper that I’ve seen where there is kind of a ghastly prurience to it. Where you get the sensation that the creator of the work and the audience to some degree are becoming excited by the idea of this monster stalking and eviscerating women. So we wanted to try and take a huge view of those crimes, to examine all of the threads of meaning that bleed out from those events, so that the actual killings are not the greater part of the work by any means. Yes, they are presented with absolute forensic detail, which is something we can only get away with in comics, and yet it was almost as if by studying those events so intensely we were able to take a tissue sample from which we could diagnose an awful lot about Victorian society and Western society in general.

Take up the slack. Well this has been to some degree my hoped-for ambition over these years. It seems to me to be a responsibility of culture to become as informative as possible and give people a source of information in a form they will be drawn to. Just as the education 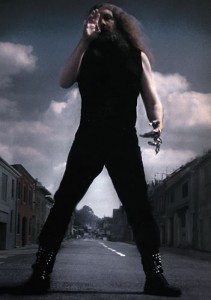 system can equate learning with work and work with drudgery and program people against the idea of learning, I can … well, everybody knows that comics are entertainment. If you can present something that’s colorful, that’s entertaining, that looks like the kind of thing that people would seek out for enjoyment, then you are much more likely to get people to respond to it. I’m sure there are lots of people out there who although they couldn’t actually give you a clear idea of their country’s history over the past couple of hundred years, but they probably could give you a detailed description of the continuities of whatever comic book or television show they are most obsessed with. We have an enormous capacity for absorbing all of this trivia, so if you can spike the entertainment with genuine information — whether that be moral information or historical information, magical information — then it actually stands a chance of being absorbed by the public.

I don’t really think that very much is interesting about the superhero as an archetype. I’ve been distanced from the whole concept for quite a while now, but I’ve been considering it.
It has occurred to me that the superhero really only originates in America. That seems to be the only country that has produced this phenomenon. Yes, we have had knockoffs of American superheroes originating in this country and presumably in other parts of the world, but they’re not natural to this environment. They’re an alien species. And I’ve thought about it and wondered why that was. And I wonder—perhaps this is being too simplistic, I don’t know, but I wonder if the root of the emergence of the superhero in American culture might have something to do with a kind of an ingrained American reluctance to engage in confrontation without massive tactical superiority.