What are the pros and cons of collaborating with another writer for so many years?

Pros: You have an instant editor to reject inferior ideas and improve story-writing. It can save a lot of time. You have a second brain and a different set of experiences to help provide those ideas in the first place and to assist in solving problems. You have company, if you feel the need for it – freelancing can be a lonely life, it’s not for everyone. Some types of story work better than others as collaborative efforts, particularly those that are humorous or action-based. Stories with a strong emotional element are more difficult to work on with another writer – emotion being more personal and subjective.

Cons: You need to work twice as quickly to make the same money. You may become mired in disagreement. The need to explain can sometimes be a rather irritating – why you want to approach a scene or story in a certain way, why characters should act or speak this way or that. When you’re on your own that’s all in your head, you don’t have to verbalise it, don’t even have to have it fully formed in your mind.

You have worked on a lot of comics with Alan Grant. It seems that at some time there was a split between you as a writing team. How did that occur? You seem to have “split up”, but still work together from time to time. Could you tell us more on that? 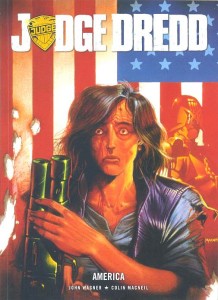 We were mired in disagreement! It became so bad that day after day we made no progress, getting hung up on the most minor details. We had some differences on story direction, but that wasn’t the major issue. I think we were just getting a bit stale, needed a break from each other, a new challenge.

We split up quite amicably, still good friends. The division of work was fairly logical, Dredd being my character and Batman duties going to Alan, who was more in tune with American comics. I also passed some other characters I’d created to Alan – I felt I’d run my course on them and that he would do a better job.

After we split up, and when we lived closer to each other, we would get together after work to collaborate on other projects. The pressure was off, it was more of a recreation and consequently became a pleasure again. I think we produced some of our best material then, stories like THE BOGIE MAN, BOB THE GALACTIC BUM and JUDGEMENT ON GOTHAM – all majoring on humour. Today we live too far apart to collaborate on a regular basis.

You have written in many genres in your career. Is there any of those you are particularly fond of?

I particularly liked working on BUTTON MAN and A HISTORY OF VIOLENCE – stories set in the real world where the parameters are clearly defined.

Are you involved at all with the upcoming movie of Button Man? Do you have any plans of your own for the character?

Only to make the occasional phone call to the producer to find out what’s happening. I would like to do another series, there’s still a lot to do with the character, but unfortunately Arthur has retired and can’t be lured back to the drawing board. I did write a fourth series some time ago with Frazer Irving on art duties, but though Frazer did a fine job it didn’t seem like Button Man without Arthur. So, unless Arthur has an unexpected change of heart, I guess that’s it.

Do you sometimes feel that no matter how many great comics you write, people will never go past the fact that you are Dredd’s creator? Is such a successful character also responsible for holding you back, so to say?

There’s a lot of truth in that, but I don’t let it worry me. At conventions enough people approach me with other work to make me feel my other activities haven’t all gone unnoticed. In fact, in Athens some of the fans wanted to talk about stories from way back, ones I’d practically forgotten, like “Joe Two Beans”, the native American GI. Nobody’s ever mentioned that one before. That was quite pleasing.

What was the reason for the creation of Judge Dredd and how did he come up?

I was looking over the stories Pat Mills had created for the fledgling 2000AD and noticed one omission was a ‘tough cop’ story. I’d introduced one when I was editing Valiant and its popularity was impressive, so I knew such a story would work well. Dredd just took the tough cop angle to new extremes. 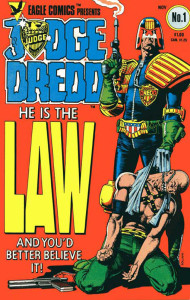 Even though Dredd is written by a large number of writers it is clear that you are the head writer who is responsible for the major changes in the comic. How does that work?

Not always that well. They don’t consult me about stories by other writers, so some lack of consistency can creep in. It’s one of the reasons that I occasionally take over and do a much longer story, to try to get everything back on track.

Would you rather have a specific end for Dredd as a character, or would you prefer for him to continue (maybe under some other head writers)?

My preference doesn’t come into it, I’m afraid. I’d like to write the “Death of Dredd” story but editorial are understandably not keen. In any case, too many people care about the story to bring it to an end.

Have you considered giving up Dredd and handing him over to other head writers? Have there been times you said “I’m done with him”?

Yes, I’ve said that several times. And the day is fast approaching when I will give it up.

Can you tell us anything about your upcoming projects?

Don’t have any upcoming projects. I’ve been reducing my work lately with a view to retiring sometime in the not-too-distant future. At least retiring from comics. I have it in mind to write a novel, though thinking about it and actually getting round to it are two different things!