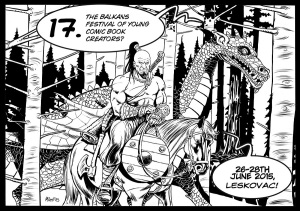 This year Leskovac school comics “Nikola Mitrović Kokan” operating within the Leskovac Cultural Centre will organize the event The Balkans festival of young comics creators” for the seventeenth time.

The event will take place from 26th to 28th June 2015 in the premises of Leskovac Cultural Center and the National Museum of Leskovac.

This year the festival will also be competitive, and the best in the categories of young comic artists, illustrator, comic strip writer and theoretician in the Balkans will receive plaques with the image of Nikola Mitrovic Kokan. Also, the second best in all four categories will also be awarded with Diplomas… There will be a Diploma for the best rookie, and there will also be an award for the contribution to the Serbian comic, whose winner will be the president of the three-member jury awarding the other prizes. The received works will be presented in the Gallery of Leskovac Cultural Center and their authors will receive letters of thanks for participation in the festival as well as the mention in the catalog that each participant will receive. As part of the event which will last three days, there will be several lectures, public class drawing in the lobby of the Leskovac Cultural Center, projections of animated films and documentaries, the promotion of several comic magazine (from the country and from abroad) and a book on comic books, as well as panel discussions, public interviews and round tables.

As for the propositions for participating in the competition, they are as follows: the term young author means those authors under thirty years of age, and all who meet this basic requirement are free to present their works to the jury in any of the four categories. The older authors may also exhibit their works, but they will not enter the competition for awards. In the category of illustration you can apply illustrations in color and black and white illustrations alsike. The comic scenarios and theoretical texts should be submitted typed. One can also submit a finished and completed comic that is based on a scenario. The pages doesn`t have to be from a complete comic, and one can participate with as many works as one likes. Also, the work(s) you are submitting does not have to be done specifically for our festival or done during last year. It is only important that it has not been exhibited in The Balkans festival of young comics creators before. Note: It is important to clearly state one`s age so as to avoid all possible misunderstandings.

This notification is therefore a call for participation to all young comics authors, comic schools and comics workshops operating in the Balkans; Leskovac school of comics will do our best to be the best possible host for all guests.

Important note: The works should be sent to the following address:

No later than June 1st 2015. The originals are desirable, but it is possible to send high-quality copies and scans in 300 DPI to the address balkanska.smotra.stripa@gmail.com where it is also possible to get additional information.

The festival has a blog on: http://balkanskasmotra.blogspot.com/