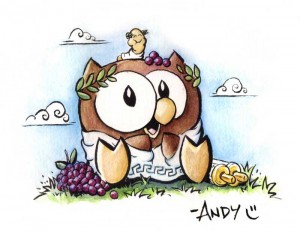 So, what is OWLY about?

It’s just a story about a little kind-hearted Owl who has a best friend who’s an earthworm. Together they have adventures in the forest while trying to make new friends. Even though Owly should be a predator by nature, he chooses to be kind and nice and make the world a better place. The story lines of the books are relatively simple but I like to describe them as emotionally complex. They’re also non-violent and gentle.

How did you come up with this story?

Well, when I was in college, I lived at home and I would stay up really late working on design projects. I would leave little notes for my mom and let her know what time I went to bed so she wouldn’t worry about waking me up. I stayed up so late that she started calling me her “little night owl.” But I could tell she was worrying about me so I wanted to make her smile when she read the notes. Now, she’s always loved my cute little drawings – the cuter the better. So I started drawing this cute little owl on the notes to make her happy. I drew him like that for years and after a while he sort of became my mascot. Years later, when I was trying to come up with a comic book idea, I tried everything, dragons, aliens, ninjas… nothing worked. Then one day I just looked at Owly and saw what I had. He’d been there all the time and I had totally missed it.

But that wasn’t all. Over time I’d been drawing little birds and animals on the notes along with Owly. Through him I was somehow able to capture how I saw nature and how beautiful it was to me. I could take little snippets of things that really happened to me… like bluebirds rejecting a birdhouse, or hummingbirds having to leave for the winter, and I could reinterpret it all through Owly’s eyes. I could draw on the excitement, happiness, sadness, beauty, and joy that I saw around me, bring it into my art and enjoy every minute of it. I combined all of that with my love of comics and drew a little Owly story one day. It all felt so natural. I loved it! After that I started writing and drawing more and more stories using Owly and everything just clicked.

How did you develop your style and what are the works/artists that had an influence on you?

Honestly, one of the things that really guided me and continues to guide me is the simple fact that I don’t really like to draw people. I never have. I somehow just see more character in animals. I loved Babar, Paddington Bear, Curious George, and Lyle, Lyle Crocodile as a kid (and still do as an adult). I think the first animated movie I saw was THE RESCUERS and all of the Disney films were hugely inspirational for me because animals usually dominated the story lines. I also lived for Saturday morning cartoons. After I’d watch, I used to try to draw what I had seen. This was pre-VCR and DVD, so I’d have to watch closely to study the characters. That’s really helped me out over the years. I found myself drawn to animated cartoons because a lot of characters designed for animation are simplified (so that it’s less time consuming for the animators) and that made it easier for me to draw them as well. Keeping it simple was always the name of the game. The fact that I’m a bit impatient when I’m drawing probably has something to do with that.

Why did you decide to tell your stories without words?

The wordless aspect of OWLY actually came about from me being unsure of my writing abilities. I’d been drawing my whole life, so I had some experience with that, but when it came to telling stories, I felt like a complete amateur. I had written a little mini-comic before Owly called Orzo and the dialogue was terrible. The story concept was okay, but the words were getting in the way. So, I decided to just leave them off and let the characters’ body language and expressions do the talking. I actually thought the guys from Top Shelf might want to add dialogue, but they said it was fine the way it was, so I just left it all off. Eventually I had to do something to help communicate certain concepts. I learned a lot from Kurt Wolfgang, who used icons instead of dialogue, and reading his book WHERE HATS GO gave me the courage to use icons to help with my storytelling. I used to design computer icons for a living, and well-designed icons can convey complex ideas clearly and universally. Once I brought that into my comics, the way I’d tell stories came together. 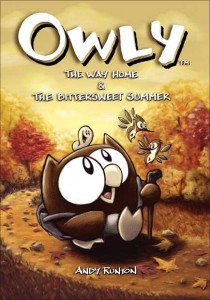 Your stories are suitable for all ages, was it a conscious decision or just happened?

I really didn’t make a conscious decision to pursue an all-ages audience or to avoid a more mature one. Owly is a lot like me and, personally, I like stories that can be enjoyed by the whole family and that have a message of understanding, kindness, and hope in them. I wanted to tell those stories, especially stories that make you happy at the end. This doesn’t exactly fit the predominantly dark world of comics, and because of that, I didn’t think anyone would ever like OWLY. Thankfully, I was wrong.

How do you feel about OWLY being used in classrooms?

I think it’s absolutely wonderful! Because of its accessibility and wide age-range, OWLY has become incredibly popular in schools and libraries. The range of fans I have makes it an easy thing to take home because so many members of the family can read these books. Families want to share OWLY with everyone they know and so they take him to school and to their libraries and have helped him in so many ways. I have librarians writing me letters and being excited about the books because little Owly loves to do research. I never thought of that. I just come from the old-school way of thinking. In my world, if you don’t know something, you look it up. And that’s what Owly does.

I’ve also had Owly fans who are teachers, coming up to me and telling me about all of the things they use the books for in the classrooms. So a while back, we decided to try to help them out. I checked into it and realized I couldn’t afford to hire someone to create any lesson plans. But when I really thought about it, I looked at my mom and said, “Who knows Owly better than we do”? We know all of the things we want people to see in these stories, and we just need to talk about that.” So that’s what we did. My mom used to teach at a pre-school and had written lesson plans before. We did all of our research and approached the books thinking about what we wanted people to learn from Owly. We created an Owly Plan Packet, that I distributed freely on my website hoping it would help. The response has been wonderful! Teachers have e-mailed me lots of suggestions and my mom and I plan on updating the document every year and adding new and more diverse lesson plans. It’s really exciting. I honestly never imaged anyone would like these little stories, so I’m constantly surprised by their appeal and I’m amazed more and more every day. 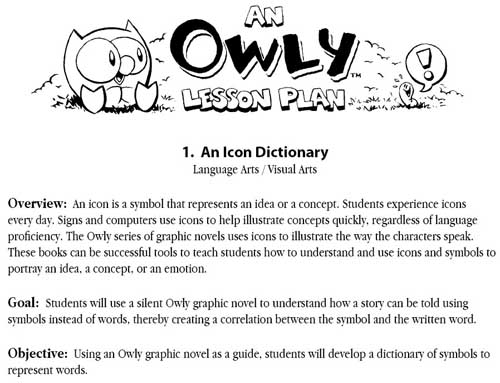 What can we expect in Owly’s future?

I’ve got lots of new ideas for stories waiting to be told as well as new toy ideas, promotional items, merchandise updates, and some new Owly endeavors like the new Owly children’s books that are coming out. Those are going to be published by Simon & Schuster and will be in full color. They’ll also be silent like the graphic novels. It’s really exciting to work on those because I’ll be bringing Owly to a broader audience. The stories are wonderful, and I think that my current fans will love them as well. It’s going to be great!

Will you say something to your Greek audience?

I’m incredibly honored that you’ve let Owly into your hearts! My publisher has Greek heritage and I’ve stayed with his parents and experienced a lot of Greek hospitality first-hand. We really appreciate all of your support and we’d love to visit Greece someday. I’m sure Owly would love to experience all of the history and wonder of your culture in a very owl-friendly environment. 🙂